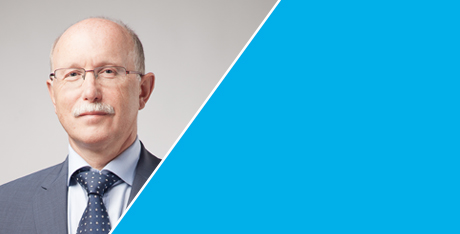 Mr. Vladimir Rybakov is the Senior Partner of ARS-Patent’s St. Petersburg office. Mr. Rybakov concentrates his practice on counseling, litigating, and licensing matters for domestic and international clientele, focusing primarily on patent, utility models, and industrial design applications in mechanical technologies. Mr. Rybakov has had an extensive amount of experience in dealing with automotive products and machinery tools.

Mr. Rybakov graduated from the St. Petersburg Baltic State Technical University in 1974, with a M.Sc. in mechanical engineering and a specialization in aircrafts and flying apparatuses. In 1986, Mr. Rybakov graduated with a distinction from the Russian Intellectual Property and Innovations Institute, earning a patent agent certificate. In 1993, Mr. Rybakov was certified as a Patent Attorney, with a specialization in “Trademarks, Inventions, Utility Models, and the Protection of the Designation of Origin”.

Mr. Rybakov began his career as an engineer for the “Kirov Plant”, one of the major engineering enterprises, participating in patent analyses of a number of military components. In 1982, Mr. Rybakov was appointed the Head of the Patent Department and was responsible for the development of the Intellectual Property portfolio of this major engineering enterprise of the former Soviet Union.

Prior to entering private practice, Mr. Rybakov worked as a researcher and Head of the Intellectual Property Department in scientific-research institutes of St. Petersburg. During this period, Mr. Rybakov gained over ten years of experience in the material science, mechanical, optical, electromechanical and electrical industries, in such diverse technical fields as aviation, laser technology, control systems and power generation.

Mr. Rybakov has a broad experience in the sphere of mechanics, physics, electronics, transportation, and metallurgy. Mr. Rybakov’s patent practice focuses on filing and processing domestic and international utility models, patent and industrial design applications, licensing, and preparing various intellectual-related agreements, including cession agreements. Mr. Rybakov participated in developing strategies for the litigation and the protection of intellectual property.

Mr. Rybakov is registered to practice before the Russian and Eurasian Patent Offices and has experience in litigating before the Russian and Eurasian Patent Office. Furthermore, Mr. Rybakov has handled disputes and has defended the interests of invention, utility model, and industrial design owners in court proceedings in the Russian Federation. His technical, management, as well as intellectual property background, integrate seamlessly and allow Mr. Rybakov to provide excellent legal advice in the protection of intellectual property.

Mr. Rybakov not only contributes, but is also an active member in various charitable and civic organizations in the St. Petersburg area. As a frequent participant in domestic and international conferences and symposiums for specialists in the protection of intellectual property, Mr. Rybakov has given numerous presentations as an expert in this sphere.

How can we help you?